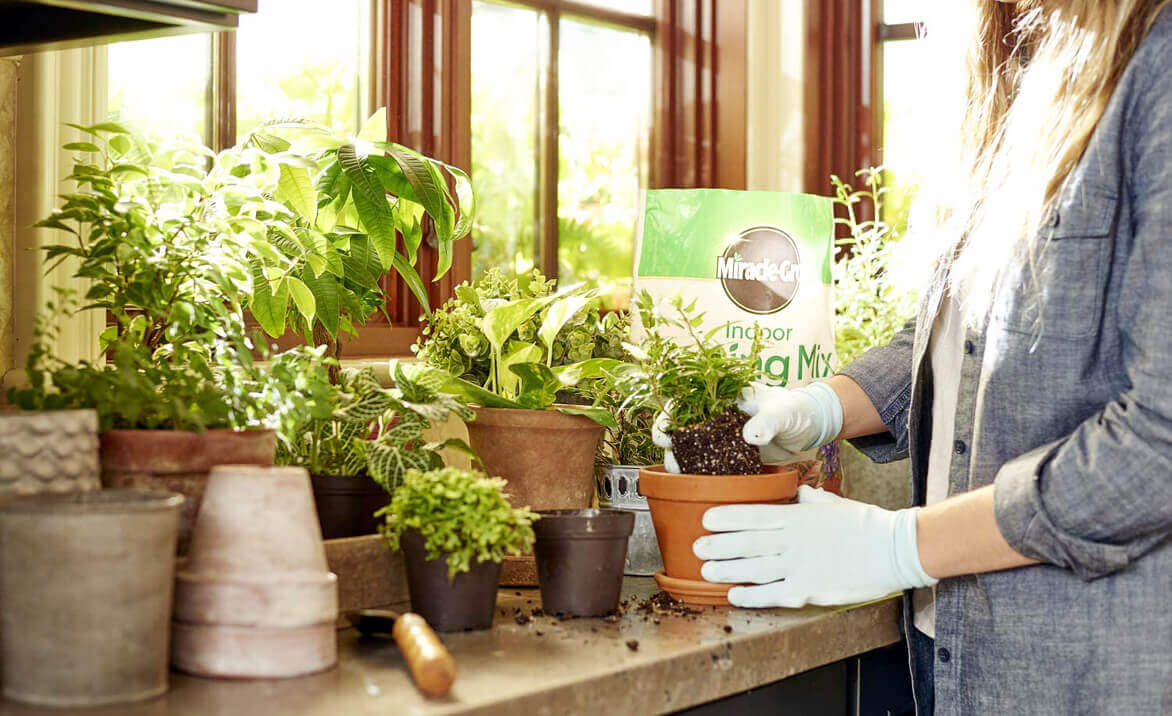 Are you excited to learn how to make organic potting soil for your herbs at home that helps them grow faster and healthy? So without further ado let’s get straight into it.

If you’re looking to grow healthy and vibrant herbs, you’ll need to start with a good potting soil. While you can certainly buy potting soil from the store, it’s easy to make your own at home. Plus, you can customize it to better suit your herbs’ needs. Here’s how to make potting soil for herbs.

Before diving straight into the procedure of making a perfect potting soil for herbs, we should know the qualities and specifications of potting soil that makes it an ideal soil for herbs. A good potting mix should include the following characteristics:

Well-drained, which implies that it should contain at least 15-20% air-filled porosity which helps them to re-wet readily because Some peat and bark media are difficult to re-wet once they dry out.

Not too hefty to lift, but not too light to simply blow over

Free of pests, such as weed seeds and fungal diseases, or sterilized without creating harmful by-products.

May be kept for short periods without substantial changes in physical or chemical characteristics.

The potting soil should be cost-effective and easily available in the market so it will be in the access of everyone.

The potting mix is incomplete if it is devoid of sphagnum pest moss. Peat is a very stable material that takes a long time to decompose and is easily available in the market with prices not too high. It adds bulk to potting mixtures without adding much weight, and it retains water effectively once wet and prevents the mixture from drying.

One of the distinctive features of the Sphagnum peat moss is well-draining and aeration, which makes it a wonderful potting mix.  It’s low in nutrients and has an acidic pH of 3.5 to 5 which is its major drawback. Limestone is used to help balance the pH of peat-based potting mixes, allowing for faster responses. I combine Premier brand peat moss with crushed limestone at a rate of ¼ cup lime per 6 gallons of peat moss for my potting soil.

Pine barks, both dried and aged, are bark particles that may be utilized as a potting mix addition. When the soil is wet, these pine bark fragments act like millions of tiny sponges, collecting moisture and gently releasing it as the soil dries. Furthermore, the unusual particle size and shape allow air to move through the soil, delivering oxygen to the roots.

Vermiculite is a natural, lustrous mineral formed of compacted silicate material, which makes it absorbent and spongy, which is a key quality of a good potting mix. Because of its water-holding and aeration properties, it is commonly used in potting mixes.

Vermiculite is ideal for plants that need to keep their soil moist and not dry out. Vermiculite in the potting soil is great for plants that love water since it can absorb up to four times its volume when water is added. Because vermiculite works like a sponge, it will aid to hold more water than perlite once combined with soil, keeping the soil wet for longer. Perlite improves drainage in the soil, allowing it to dry faster and provide more oxygen to the roots.

To make an ideal organic potting soil for the herbs you will need coconut fiber or coco peat. Coconut fiber, commonly known as coir, is a natural fiber derived from the husk or outer shell of the coconut and utilized in a variety of everyday items including false ceilings, floor mats, doormats, and mattresses. Brown coir, which is derived from ripe coconuts, is also used in potting soils.

Coco peat is a tiny natural fiber particle formed during the separation of coconut fibers from coir fiber generated from coconut husks.

To balance the pH of peat-based potting soils, add powdered calcitic limestone or dolomite limestone. For every 6 gallons of peat moss, use roughly 1/4 cup. These minerals are widely available and cheap since they are extracted from natural sources. For use in DIY potting soil, Jobe’s is a decent brand of lime.

To thrive, all plants require three macro nutrients: nitrogen, phosphorus, and potassium. When making your potting soil, be sure you have enough of these nutrients on hand.

Compost is a fantastic addition to DIY potting soil because it contains billions of helpful microorganisms and has a higher water-holding capacity and nutritional content. I use it in all of my basic homemade potting soil recipes since it serves such an important part in supporting healthy plant development. However, I don’t add compost in seed-starting recipes since it’s too heavy for early seedlings and can harm the delicate seedling.

♦ What Gardening Tools Do I Need?

How to Mix the Ingredients to Make the Organic Potting Mixture

In general, the following ingredients are used in the given concentrations to make an ideal organic potting mixture for herbs.

This is the ideal concentration used in making the potting mixture soil for the herbs.

What is a good potting mix for herbs?

Different herbs have different soil requirements. However, a good starting point would be to use a potting mix that is light and well-draining, as most herbs prefer these conditions. You can also add some organic matter to the mix, such as compost or manure, to help provide nutrients for the plants.

How do I make my own potting mix?

There are many recipes for potting mix, but a basic one is 1 part peat moss, 1 part perlite, and 1 part vermiculite.

If you’re looking for a way to make your own potting soil for herbs, this is a great option. By following the simple steps in this guide, you can create soil that will provide your plants with the nutrients they need to thrive.